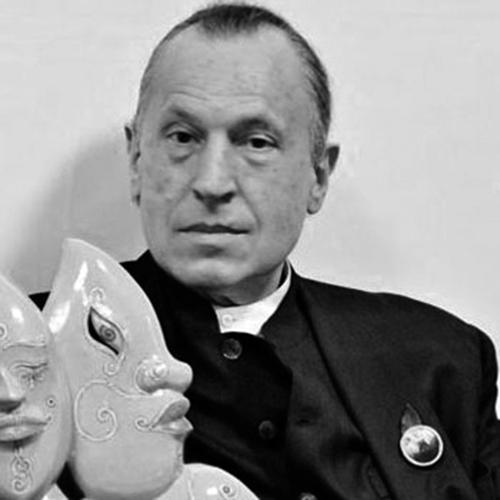 Born in Vergato in Emilia in 1943, a few months ago he appeared in the news involuntarily because of a public fountain donated to his home village which was vandalized and attacked by populist political figures due to the naked faun standing in the middle of it. Luigi Ontani is one of the protagonists of that “revolution” which in the late ‘70s and the early ‘80s changed the direction of art from conceptual to image, painting, quotation of the past. Ontani has been a voracious experimenter and has been experimenting with various techniques for some years now, not disdaining however to draw on his conceptual experience, consisting mainly of symbols and figures lifted from the history of art and from extra-European cultures. Words play an important part: his titles establish a cross-referential relationship with the works, with abundant use of onomatopoeia and assonance, learned and popular references, children’s games and poetry. The nature of Ontani’s work is in fact mixtures, grafts, syncretisms from which hybrid, two-way beings emerge, or unnatural stories or fables, where reality and imagination are interwoven.

Although he has participated in biennales and international exhibitions, and his works can be found in private and public collections all over the world, from the LACMA of Los Angeles to the FRAC of Calais, market values are still quite modest. The pottery sculptures usually fetch around 200,000 euros; the watercolors and photographs, if they are large and from the historic period, reach 100,000 euros, while the smaller ones can still be purchased for a few thousand euros. The history and the quality of the works of this artist, who now has his place in the history of art, make a possible increase in the near future easily imaginable.