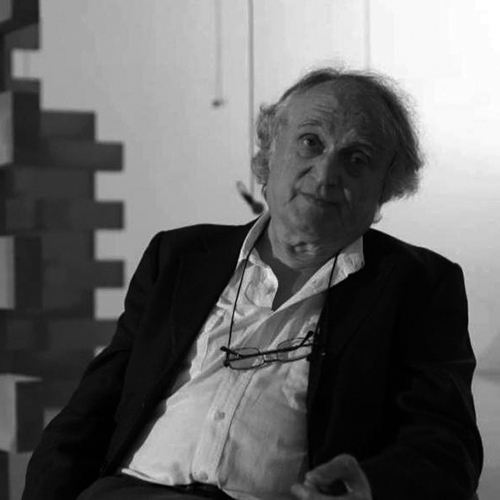 Gilberto Zorio, born in Andorno Micca in Piedmont in 1944, is one of the most influential artists of Italian Arte Povera. After taking part in the movement’s founding exhibitions curated by Germano Celant (La Bertesca in Genoa; Arsenali of Amalfi, De Foscherari in Bologna), his first solo show was in 1969 in Paris, at the Sonnabend Gallery of Ileana Schapira, the wife of Leo Castelli, both art merchants and important gallery-owners at that time. With this exhibition his talent was consecrated on the Arte Povera scene. He was also present in the celebrated When Attitudes Become Forms, curated by Harald Szeemann at the Kunsthalle of Berne in 1969. His multiple presence in Europe and overseas rapidly promoted him to international fame.

Zorio’s artistic experimentation studies the relationship between matter and energy, creating tensions and often movement. The process which makes the work modifiable derives from the co-presence of contrasting elements such as copper, clay, lead, sulfur, which produce chemical reactions; but also agents like lighting and electric current confer energy and dynamism on the work. The recurring forms are canoes, javelins, crucibles and glass and lead alembics in which alchemical transformation processes occur, but the geometric figure most used is the star, an ancestral, cosmic figure.