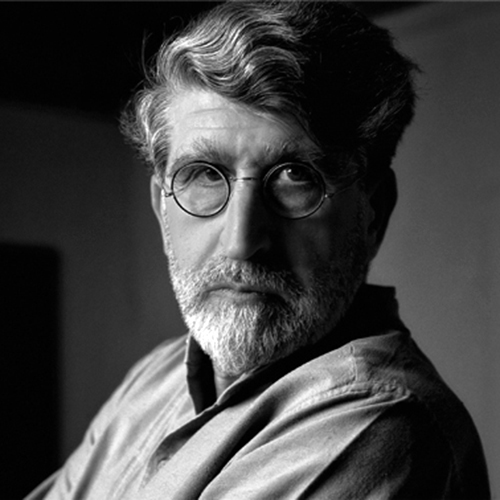 Valerio Adami was born in Bologna in 1935. He began to paint at a very young age and constantly travelled around Europe, Asia and America. 1951 was a fundamental year in his personal and artistic development. He met and associated with Oscar Kokoschka and began to study drawing with Achille Funi at the Academy of Brera in Milan. At the beginning of his career he drew inspiration from the Expressionist avant-garde, particularly from Francis Bacon, then he moved towards abstract and gestural painting and later focused on the development of American Pop Art modules. His works thus took on the character of fantastic-sarcastic comic-strip stories, into which he inserts banale modern objects in symbolic mode. His style distinguishes itself for the use of a decisive color-scheme, with flat coats of color separated by clean black lines.

Between 1961 and 1964 he worked in London and Paris, concluding with his participation in documenta 3 of Kassel, in which he presented his works in a solo show. In 1967 in New York he made a series of works which were exhibited the following year in the Venice Biennale. In 1985 the Centre Pompidou of Paris dedicated an anthological exhibition to him. Adami gained the reputation of international artist and received numerous commissions for works in public areas, including two large panels for the atrium of the Gare d’Austerlitz in Paris (1987).

In 2005 he created the Fondazione Europea del Disegno in Meina on Lake Maggiore in Italy, with the aim of conserving his artistic legacy and of teaching and propagating the cultural technique of drawing.

The value of his works has increased in the last few years, the basic price of the single works now being over 50 thousand euros. But these values are still modest in relation to the artist’s international stature, making a possible future increase likely.