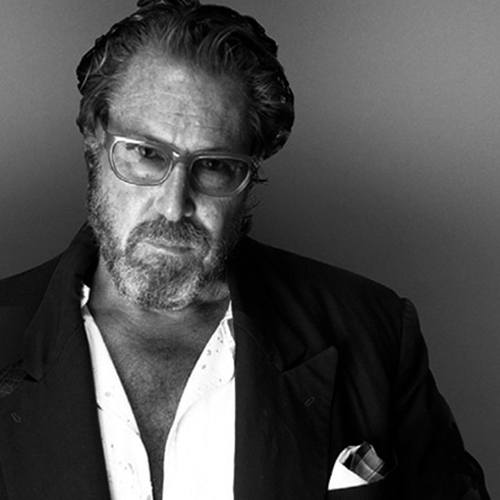 Julian Schnabel was an important figure in the return to painting in ‘80s New York, which he then described as a director in the film Jean Michel Basquiat. He is a many-faceted figure who passes easily from visual art to cinema. He was born in Brooklyn in 1951 and became rapidly famous already in the late ‘70s for an impetuous, textured, brightly-colored painting style, mostly done on canvases covered with fragments of broken plates. A kind of craclé, of mosaic, which recalls the lumpy material used by Gaudi in the Sagrada Familia. His rise to success, also on the market, was so rapid that his first solo show at Mary Boone’s in 1979 was sold out before it opened.

Later his style evolved, maintaining its strongly neo-expressionist character. Schnabel often paints on used curtains, wood, decorated fabrics, combining painting, materials and words. The words, whose cubital characters however maintain a chirographic style, are closely related to the painting, on the one hand becoming an image in themselves, but at the same time defining the meaning of the colored shapes.

Schnabel alternated his artistic and film work, obtaining great success also in the latter. In 2007 his film The diving bell and the butterfly won the prize for best director at the Festival of Cannes.

His market performance is good. While many works fetch over 2 or 3 thousand dollars, in the last few years some of his historic works have been sold at over a million dollars.