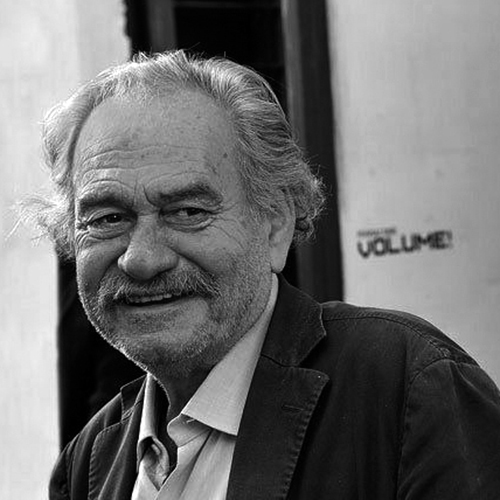 This Greek artist (he was born in Piraeus in 1936, but lived in Rome where he died in 2017) was one of the protagonists of Arte Povera, where, according to Germano Celant’s original definition, “povera” stands not so much for the poverty of the materials as for their primary nature. In fact Kounellis always used natural materials in his works: coal, metal, stone and earth.

Although most of his work consists of three-dimensional installations, Kounellis always considered himself to be a painter, intending his work as a kind of expanded painting which invades space.

Usually his works are based on the contraposition of a hard, stiff, inert material and a soft, mobile, vital one. This is the case for example of the metal sheets cut through with blowtorch nozzles with flames coming out of them; or the blankets squashed between steel girders; or the cold metal installations with living plants and animals such as cactuses, blackbirds, parrots on them.

And so to the celebrated, revolutionary work in 1969, in which Kounellis exhibited in a gallery only living horses which constituted the whole work. The stiff, inert part was here represented by the walls and floor of the L’Attico gallery. He was also the author of extremely strong performances often involving music and references to the ancient culture of his native land, such as Apollo, 1973.

Kounellis was invited to present his works in the most important exhibitions in the world, and his works are in the main private and public collections: the MoMA of New York, the Reina Sofía of Madrid, the MAXXI of Rome and the Centre Pompidou of Paris.

He was an artist who was not very interested in the market, and he did little in his lifetime to defend the values of his works, which are still below those of the parallel American and European artists. Given the indisputable quality of his work, after his death we can logically expect an increase which may well be very rapid and substantial.