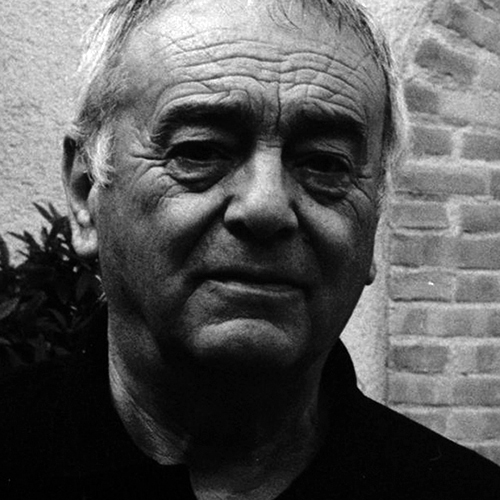 Giuseppe Uncini was born in Fabriano in 1929 and died in Trevi in 2008. He began his career adopting the current abstract expressionist style, then developed in a more constructivist direction. Between 1957 and 1958 he already made a fundamental change in his style; with the Cementarmati (Reinforced concretes) he was one of the first to use concrete as an artistic product, in works in which iron and metal netting contrasts with the porous, rough cement surfaces. He definitively abandoned the expressionist trends when he founded the Gruppo Uno. in 1963, with Biggi, Carrino, Frascà, Pace and Santoro. The aim of this group, supported by Giulio Carlo Argan, was to identify the fundamental elements of artistic creation and define a different function for the artist in society.

Over the years, Uncini experimented with different materials such as bricks, iron and wood. In the ‘70s he began the series called Ferrocementi (Ironcements) in which finely smoothed cement becomes the background of the picture, leaving space for iron, the true protagonist of the work; and Strutturaespazio (StructureandSpace), works exhibited at the 1966 Venice Biennale.

His first solo show was held at the Attico of Rome in 1961, and in the decade between 1955 and 1965 he took part in the Rome Quadriennale, the International Biennale of Tokyo, and exhibited at the gallery Il Cavallino and in various editions of the Venice Biennale. In the ‘90s and 2000s he took part in exhibitions all over the world. In 1995 he received the Award of the President of the Republic for sculpture, while three years later he was awarded the Feltrinelli prize, again for sculpture.

Giuseppe Unicini is one of the Italian artists who have attracted the attention of the international markets in the last few years. The results of the sales of his works have reached unexpected sums, as in the case of a work of the series Cementarmato (Reinforced concrete) made out of iron and cement in 1961 and sold for 295,800 euros, more than double the starting estimate.