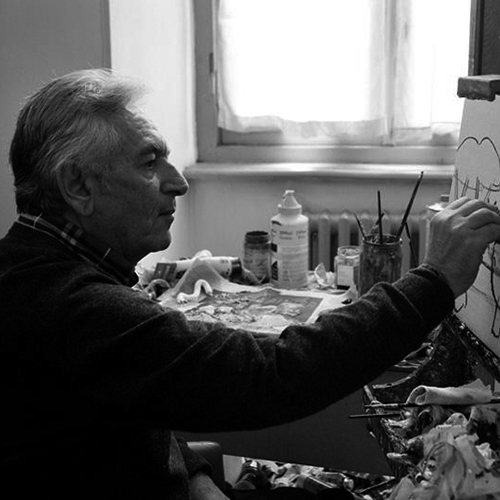 Salvatore Mangione (this is Salvo’s registered birth name) was born in Leonforte in Sicily in 1947 and died in Turin in 2015. The first stage of his work in the ‘70s was strictly conceptual, in line with the widespread trend of the time. But developing a kind of narcissistic self-celebration, he began to compare himself in photomontages with other figures, including the great masters of the past like Raphael, or to carve sentences in marble like the famous “I am the best”.

It is through these confrontations with the history of art that Salvo, already in the ‘70s, returned definitively to painting, anticipating that great international movement (with the Italian Transavanguardia and the German New Savages) which constituted a counter-revolution to conceptualism. St. Martin and the poor man (1973) d’aprés El Greco, which he exhibited in 1974 at the MuseoWallraf-Richardtz in Cologne in a room containing Simone Martini, Lucas Cranach, Rembrandt, Cézanne, was a milestone, as was also St. George and the dragon (1974), d’aprés Raphael.

But it is since 1980 that Salvo has fully developed his mature style, definitively turning to painting and the style which has characterized him since then. He mostly produces landscapes, often originating from real places but treated with a primitive approach, with little Giottoesque trees painted with a rich color-scheme which varies from pastel colors to acid tones and thus transformed into unreal, dream landscapes.

The works of Salvo, above all the paintings, have a rich market and enjoy a good number of exchanges. The paintings done from the mid-‘70s to the mid-‘80s rarely fall below 50,000 euros, with peaks even over 150,000 euros.