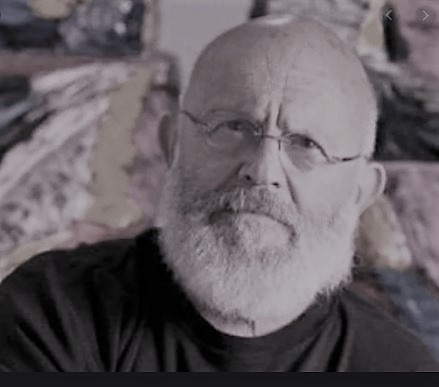 Jim Dine was one of the protagonists of Pop Art, but he decided not to bind himself to that movement and has always continued with curiosity to expe-riment with new visions and new techniques.

He was born in Cincinnati in 1935 and, after moving to New York at the end of the ‘50s he was one of the artists, with Allan Kaprow and Claes Ol-denburg, who started in the streets of the town the type of performance which came to be called “happening”.

After taking part in the initial Pop Art exhibitions, in 1964 he was also one of the artists of the American pavilion at the Venice Biennale who contribu-ted to the international recognition of this movement. He is greatly attracted to tools, and on the works of the ‘60s he often hung on the canvases perso-nal objects such as shoes, clothes, saws, shovels, brushes or paint tins.

Generally his work has never abandoned a certain pictorialism made up of smears and drips, which had some echoes of Action Painting. Even when he has concentrated on the repetition of logos, images or common objects, as in the hundreds of heart shapes he reproduced for years, the outlines often come across as vibrant, corroded, with a certain manifest, intentional craf-tsmanship.

He has often combined sculpture and painting, as in the Pinocchio series; or in the Venus of Milos series, a large bronze example of which stands just a few steps away from the MoMA of New York. He has had large retrospec-tives in the main world museums, such as the Whitney Museum (1970), the Walker Art Center of Minneapolis (1984-85), the Guggenheim of New York (1999), the National Gallery of Art of Washington (2004), the Centre Pompidou of Paris (2018). His works are conserved in the main internatio-nal collections.

Jim Dine’s values are not yet very high. Paintings from the ‘60s or ‘70s fetch a few hundred thousand dollars in auctions. But the not excessive cost of the most recent works gives hopes of a good chance of increase.