“Even if art goes online, I’ll go on giving precedence to its human side” Interview with Giorgio Fasol 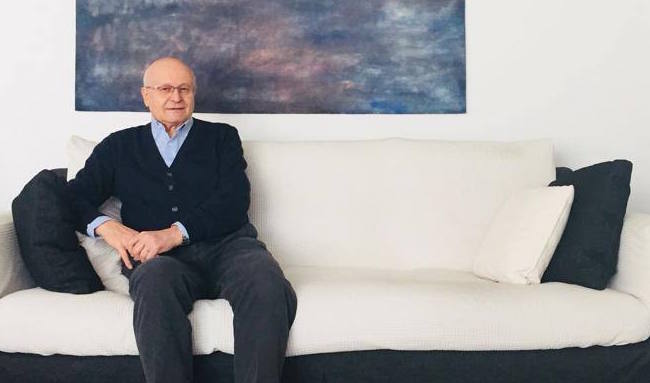 “Even if art goes online, I’ll go on giving precedence to its human side”
Interview with Giorgio Fasol

by Fabio Cavallucci and Jennifer Zanga

Giorgio Fasol, a retired accountant born in Verona on 21 July 1938, has built up a noteworthy private collection out of his great passion for contemporary art: AGIVerona Collection. We interviewed him for Art Share, to learn how his collection started, and how he has assembled such an important body of works without investing billions.

How did your passion for art and collecting come about?
My passion began when I was a child. I’ve always collected things: first picture cards of footballers, then sports newspapers, finally stamps. My first meeting with art was on the day I got my school-leaving diploma. With my summer savings of 365 thousand lira (which in 1958 was quite a nice little nest egg, a civil servant’s yearly salary) I set off for the only gallery in Verona at that time to look for a work by Giorgio Morandi. I didn’t know the Bologna artist personally, I’d read an article in a magazine about an exhibition of his and was impressed by his skill, so I began to get interested in him.  I went to the only gallery in Verona. The gallery owner told me kindly: “Young man, it’s not a bad choice. I haven’t got any of Morandi’s works, but I could get hold of one for you”. But to avoid any misunderstandings he told me the price there and then: a million and a half. I said goodbye to him and forgot about the purchase. With that money I bought some Veronese artists a short time afterwards, most of which I later gave away.
A few years later, it was my friend, the artist Renzo Sommaruga, who stimulated me to train my perception by looking at new things. He was also a printer and produced artist’s books in editions with works and poems. I also remember the impression made on me by an edition of Capogrossi which I saw among his printed works. Love at first sight. Again through Sommaruga, during a visit to the studio of Giuseppe Ajmone, for the first time I got the chance to see a work by Fontana, which immediately enthralled me. I remember that after over an hour’s wait, Ajmone came skipping out like a child, holding a drawing by Fontana. He had just bought it from a boy who worked in his studio. From that moment on I set out to find a work by Fontana, and I found a really high-quality one in a museum exhibition at the Galleria Cattaneo of Brescia. It was a wonderful show, there were three Fine di Dio (End of God), I still remember it. I asked for the smallest work, a grey aniline with two white oval holes: lovely. I asked the price: it cost three million. I had only one. But my desire to have it was so strong that I proposed leaving one million deposit and promised to pay off the balance as soon as possible and to take the work away only when I had finished paying.
Another element came into play here. Cattaneo said to me: “You do well to buy Fontana, but now I’m going to show you a young man who’s going to be as famous as Fontana in a few years’ time”. He went to the stockroom and unrolled for me a large sheet of linen paper with S’s and black arrows: it was a huge Kounellis. I think I saw it again in the retrospective at the Prada Foundation. Really fine. Wonderful “How much does it cost?” I asked. “A million”. My wife, much more down-to-earth than me, nudged me that I should refuse. I’d already got myself a debt of two million, how could I have managed with one more? But thinking back on it, it would’ve been much better if I’d taken it.
This was however the moment when I felt something inside, a strong passion for collecting.
I also met Panza di Biumo, whom I consider to be the greatest post-war collector. Once we were looking at some multiples and he showed me some by Frank Stella and Ellsworth Kelly. This was how I opened up to the international market. Then the passion for very young artists began.

How do you choose which works to purchase?
I think that first of all you must have some knowledge of the world of art and of the history of art, but also of young contemporary artists. A good knowledge allows you to make a first selection:  for example, if there are a hundred works, you cream off eighty, leaving twenty. Then, logically, you choose from the ones left by intuition. A work has to trigger a spark in me.
I’ve never bought works based on recommendations; painting for me must be seen live, in the flesh.

How do you select the young artists; for them knowledge obviously counts less, since their interest is in developing new languages?
I’ve never bought directly from the artists.
Many years ago at a collective show I happened to see two large canvases by a young artist who was unknown at the time, and being impressed by these works I decided to ask the curator for information. He introduced the artist to me directly; it was Tomaso De Luca, who told me they were on sale for two thousand euros, but I got the sensation that the young man was reluctant to deal with galleries. I waivered the purchase and told the artist I would buy his works in future if he collaborated with a gallery. A year later he contacted me to tell me the name of the gallery he had set up a collaboration with, the Monitor gallery in Rome. As promised, I went there and bought the canvases; I paid 500 euros more than the original two thousand, but I’m happy to have preserved the art system.

Have you ever sold any of your works?
Alas I’m forced to sell one work a year in order to continue collecting. I always find myself at the same crossroads: give up or go on, and to do the latter I’m obliged to sell, with no few regrets. Unfortunately, I haven’t got extra funds. I’d like very much to organize a photographic show of the works I’ve sold; I can guarantee it would be an excellent show. There would be fine works by artists such as Maurizio Cattelan, or Alighiero Boetti or Cy Twombly.  I possessed a work of Twombly from ’59, purchased from a gallery in Milan: a one meter by one meter canvas, dirty white with two different-colored commas, one red and one green with ROME 1959 written underneath. I sold it at the beginning of the ‘70s.
I also had a work by Mario Schifano; they were two joined, superimposed canvases, approximately 60 x 180, from 1960, with the two Cs of Coca-Cola, one white and one red. It was a very fine work, I still dream about it.
How much does the aspiration to investment count for you in the purchase of works?
I think the economic aspect must not dominate exclusively, art must be loved and it is the work above all which interests me personally.

Have you ever purchased works via tele-shopping or a web platform? What do you think about these?
No, far from it.
I do however think it will be the future of sales and I too will probably end up looking at works online. Actually, I have made just one purchase via auction, a London auction house, it was a work by an Italian artist; but I do give precedence to the human aspect, for me that is what still counts. But let’s see how things change in the near future.

How do you think the art market will change after the pandemic?
It’ll change for many reasons, I believe we will go through, and are partly already going through, a deep crisis, for art too. This thing makes me very sad, above all for young artists. For this reason I’m selling a work to support emerging artists, though selling is more difficult nowadays; I often wonder if the work can be sold at its original price or whether it should be sold for 20-30% less because of the situation we’re living through. It shocked me to learn that the MoMA has had to sack 60% of its employees and that it’s selling works in order to survive economically. I must admit this crisis frightens me, because it’s general, though I’m sure there’ll be a recovery.

How do you see your collection in future?
At present I’ve got twenty or so works deposited at the MART. I’ve got several ideas, but I still haven’t really thought what to do in concrete terms. I’ll decide also on the basis of the requests from museums. I’ve got a convention with the University of Verona, and this choice may open up new avenues; though we’re at a standstill due to the current situation.
I’ve loaned eighty of my works to the University for 5 years. The idea was to appoint a student as the tutor of each work (so far there are already 30-40 of them), and to have them present the chosen work via a video and an interview with the artist, to publish it on Youtube, and to broadcast it on the University radio. To date 10 videos are already online on www.univr.it/it/contemporanee-contemporanei. The thing which has surprised me most has been the students’, but above all the teachers’, enthusiasm for the initiative; it’s been so great that they have set up a “Contemporary Committee”. The various professors will choose a work and investigate the contemporary aspect of their particular subject area through this work.
I have great faith in the project because, if these have been the first results in this period of stagnation, who knows what they’ll be like when university y life returns to normal.